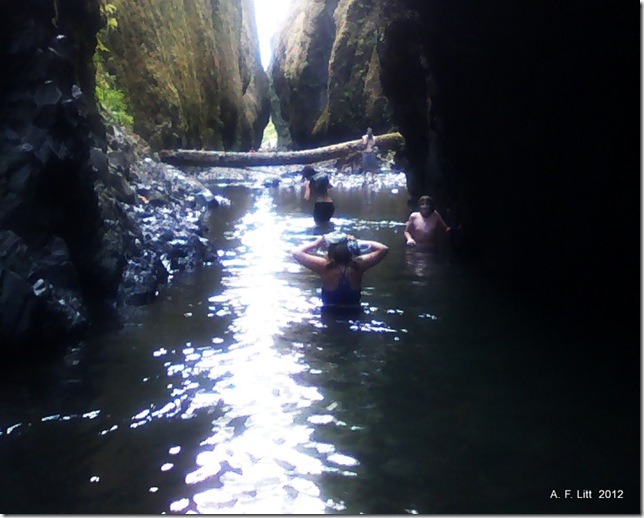 Quotes in the title because, as you can see, there isn’t much of a trail.  Just a climb over the log jam and a wade up the creek through the narrow canyon to the waterfall. 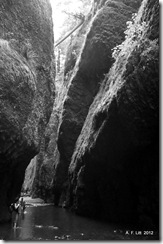 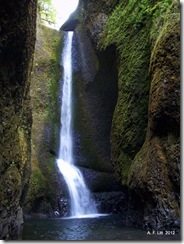 This was my first time heading out there.  I’d heard that the water in “the deep part” was about six feet deep, but after the dry summer, it was only about three and a half feet.  But cold!

It was also pretty busy with the traffic jam through the log jam requiring a little patience to traverse the obstacles in a safe manner.

I didn’t take my good camera with me, fearing it would get wet, and most of the pictures I took were shot using my son’s waterproof video camera, so they are low res with an unusual aspect ratio.  However, the long aspect ratio actually works pretty well in that environment.

Still, I would like to get some better shots out there and the water is low enough that I would not be too concerned about taking my best camera out there with me right now (mind you, my “best” camera is still relatively disposable).  Though it’s a couple weeks later, it’s been dry enough that I doubt conditions have changes out there much, and the weather looks warm and dry for the rest of the week so I might sneak out there again later this week while the boys are in school.  Probably not, but maybe… 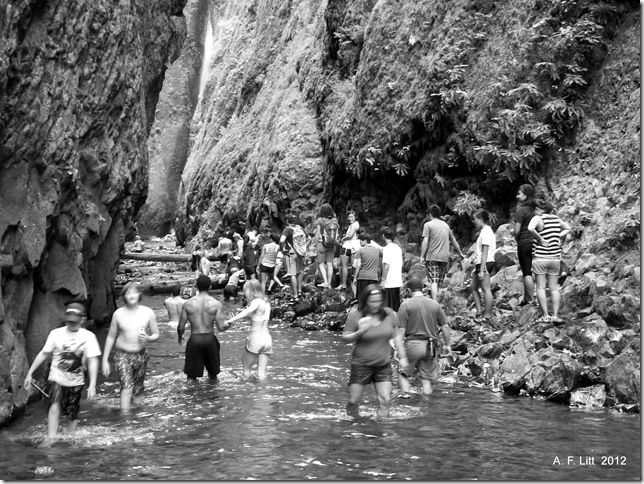 Photo Above: A large group trying to avoid the cold water of the one deep pool.  This was a pretty risk maneuver and more than one of them slid off the wet rocks into the water, getting quite a bit more soaked than they would have otherwise.  My advice?  Stay safe and just suck it up.  It’s ain’t that cold!  Besides, as you can see in the top photo, you can’t really avoid it anyway…

Seems precarious, but it shouldn't be.... thousands do it every year.... and they all survive. Almost immediately you will come to a large log jam stuck in the canyon. Be VERY CAREFUL when crossing this, especially if any of it is wet, because it can be very slippery. After you get across the log jam, now you just walk up the creek.... I mean wade.... in other words.... YOU GET WET.

This is a very short hike, but very soon you are up to your you know what is water. Yes, it gets deep, and for children, they may not be the ticket, especially for small children. The water at its lowest is probably about 3 feet deep, so we aren't talking over anyone's head.... unless anyone is very short.

More recently, this tradition has been tarnished by a series of natural events that have made the trip up Oneonta Gorge downright dangerous. First, a rockfall near the entrance to the Gorge in the late 1990s that left three pickup-sized boulders in the stream. Then a logjam formed behind the boulders, creating a slippery maze that hundreds of visitors each summer now struggle to navigate. Sadly, the danger prevents many families with children from even attempting the trip.

from tag trail
from tag waterfall
from tag canyons
(more..)
Posted by A. F. Litt at 1:00 PM