So many cool places that I’ve never heard about…  I was looking for an Oregon Field Guide clip on the Parkdale Lava Flow for a different post and I discovered this…  And yes, I am posting the location of it, though I have not been there yet myself.

ASS COVERING DISCLAIMER: If you go, don’t be stupid!  Don’t die!  Don’t enter the ravine!  Probably best not to go at all!

"A 200-foot-deep rift in the forest floor, deep enough to hold a 20-story building and create a subterranean climate at least 20 degrees cooler than summer temperatures above, has deliberately been kept out of tourist guidebooks. Its caretakers don't want people stumbling into it unprepared, or making the hour-long descent to its bottom only to be buried by one of the periodic showers of rocks and boulders from its crumbling basalt walls." 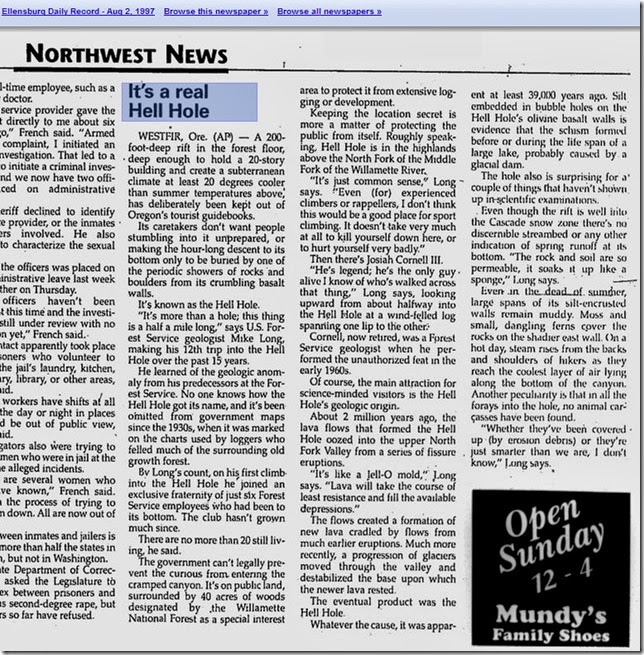 "6. Hell Hole This half-mile-long, 200-foot-deep gash in the forest floor is easily deep enough to hold the tallest building in Eugene. From the treacherous and frigid bottom of the Hell Hole, the sky appears as a tiny slit of light. The evil-looking geologic feature was created about 2 million years ago when lava flows oozed down a river valley over much weaker pyroclastic formations. Eventually, the lighter bottom layer collapsed, leaving the fissure. This area is extremely dangerous, so much so that the Hell Hole appears on no maps and the public is strongly discouraged from visiting. The Hell Hole is a bit of a legend, and some people don't believe it even exists. Maybe they're right."

Ass Covering Disclaimer: If you go, don’t be stupid!  Don’t die!  Don’t enter the ravine!  Probably best not to go at all!

Geocaching Fourm Discussion on the search for the Hell Hole’s location (more interesting than it sounds):
http://forums.groundspeak.com/GC/index.php?showtopic=34758

From 2003:
”Greebes and I have 2 words for anyone thinking about taking on the Hell Hole. DON'T GO! We left Corvallis at 6 AM. Made it up to area the Hell Hole is located in about 2 hours. Based on the what we saw on the road below the HH we decided to approach it from the north. There was logging going on to the west of the HH, not very far, you could hear the trees when they came down. We parked the truck at the closest point to the HH that we could find and set off through the brush. The brush is very thick. Salal, blackberry, and all kids of stuff so we had to weave our way through towards the HH. It was only 3/10ths of a mile. but it is very difficult to move in any sort of a straight line because of the brush. It took about 40 minutes to reach the edge. I set a waypoint there. We were standing on the edge, we couldn't see very far east or west and southern edge was not distinct. We moved to the east hoping to get a better view but it never improved. I set another waypoint here. We decided to go back to the truck and approach the HH from below as the was absolutely no way to come at it from above. We made our way back to the truck and moved down below the HH on the road. I used the GOTO function of my Garmin and set a course for the 2nd waypoint and we started up the hill. It was a very steep route. We had gone about 200 yards and had stopped to catch our breath when I noticed a deer above us about 50 feet away. Maybe it couldn't believe what it was seeing but it just stared at us. Then it turned and as it moved away it kicked loose a rock the size of a bowling ball. An omen? A warning? I don't know, but we should have taken it as one. We made it up into a boulder field, all covered with dry moss and leaves. We were now only a couple hundred feet from waypoint 2. It was obvious there was a depression running off to our left(west) as we faced the hillside but it was completely filled with brush. No way at all to get through. We tried hooking around to the right to get to the base of the wall to see if there was any sort of path or trail. Nothing there either. So we tried to go along the other side. We were able to move to the west for a couple hundred yards but were forced down the hillside by the brush and terrain so we couldn't see the edge anymore. It was at this point we decided to call off this expedition. Greebes had disturbed a hornets nest in the boulder field. I came way too close to injuring my leg when I stepped between two boulders and the solid ground turned out to be leaves and moss. Covered with cuts and scratches from the brush and under constant assault from horseflies we bailed off the hillside. We don't know if where we tried to enter was wrong or what. We are both disappointed with what we did see. We do know we won't go back. I will try and post some pictures in the next couple of days.”  Croaker

“Me and Lef-t found hells hole today. I plugged in the cordinates that croaker sent me and got up to the 1926 road around noon. At this point I saw two vehicles parked there. there was about 12 people standing around wearing hardhats. At first I thought they were firefighters for the nearby forest fire. but after getting a better look I thought these must be Geocachers looking for hells hole too. We stopped and talked to them and indeed they were going to hells hole. But they weren't goecachers and wasn't even familiar with the geocaching. The Guy was a geogist from portland and was at hells hole 19 years ago with mike long. He was there today to show his family and friends hells hole. We teamed up with them. We first parked at the intersection of 636 and 637. They only had maps showing hells hole on it. I was the only one with a GPS. we searched for a couple hours around the area of croakers cordinates. No hell hole was found. We then drove back down the 1926 road about a 1/3 mile past croakers cordinates. we climbed up about 400 ft in elevation and hiked about 1/4 mile through more thick vegatation, climbed over huge downed trees and boulders. We finally got up to a cliff and followed a trail along the bottom of the cliff right into hells hole. We needed about 50ft of rope to get down the last part. After about 5 hours of searching for hells hole we were finally in Hells hole. … You can also see a video of hells hole on the PBS website in the American Field Guide. search for hell hole (no s in hell).” Grin'n'Bearit “There are 2 other Oregon rifts that I can think of offhand. Crack-in-the-Ground has a virtual simply because it's designation doesn't allow a traditional. Beaver Creek Canyon http://www.geocaching.com/seek/cache_details.aspx?guid=56053e1c-cf8a-494c-b0a7-82d26bf13ea6 has a traditional because it's designation (or lack thereof) allows for one. Aside from some elitists in the Forest Service wanting to protect people from an identical hole, what makes these two places any different than Hell Hole? Heck, Beaver Creek is a 200 foot deep rift with sheer walls, AND they've built neighborhoods on the rim!”  mckee

“Just went back to Hell Hole today. The roads are open to Hell Hole. They still have roads closed as you get closer to where the fire was. But getting to Hell Hole is no problem. I found a much closer and easier way to the rift. It took only 3 minutes to walk from the car to the edge. There is a trail all the way there. Obviously there are many people that do know about it if there is a trail. There are also trails running back and forth along the edge with trails leading to several viewpoints. Getting to the edge is the easy part. However finding a way down is tough. After looking for awhile for the best way down I found a rope tied to a log. after careful inspection of the rope I saw it was still in good shape and used it to help me climb down a steep enbankment about 50ft. The well beaten in trail continued on to the bottom. I was able to do the last 50ft to the bottom without a rope this time. I walked the entire length of the deep end and climbed out the other side which is tougher. I went to where I had hid the cache and removed it to the delight of the protesters. I still think this place needs a cache but on the easy side. It is very easy to get to and most geocachers should have no problem getting to the edge for viewing.”  Grin'n'Bearit


“Take hwy 58 towards westfir turn left onto hwy 19 towards huckleberry flats 15.4 miles, turn left onto forest service rd. 1926. Drive on 1926 2.5 miles and turn left onto forest service rd. 636. Follow 636 1.6 miles staying to the left at a wye in the road. At 1.6 miles exactly there will be a little turn out onto the left to park. There is a definite trail starting on the same side of the road as the little turn out. Due east about 1/10 mile up the trail. Sign on tree Hellhole. If you want to go down in it bring a 100ft piece of rope. Good luck.”  bigjimmy111 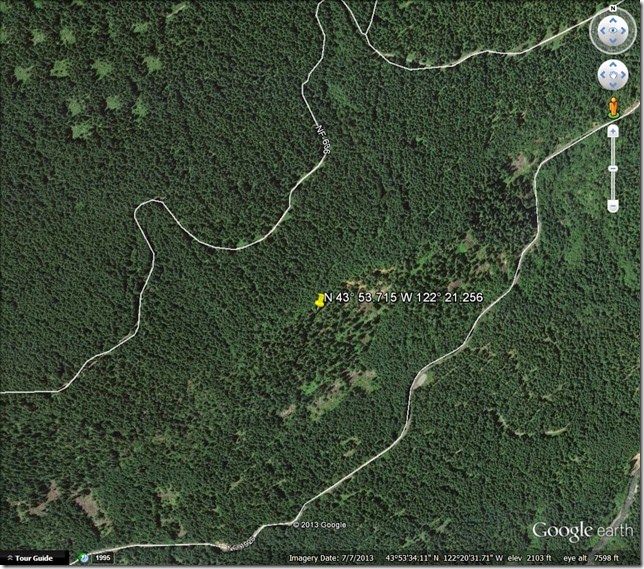 “The hike to the north rim is easy enough, only about ¼ mile on a faint unmaintained trail which can be followed fairly easily. From there the trail fades away and the going gets much harder. We climbed, slid, scrambled, and tripped our way around the east end and down into the chasm. Lunch was at the viewpoint rock. On the way back we decided that the Hellhole is so named because you have to go through hell to see it.” 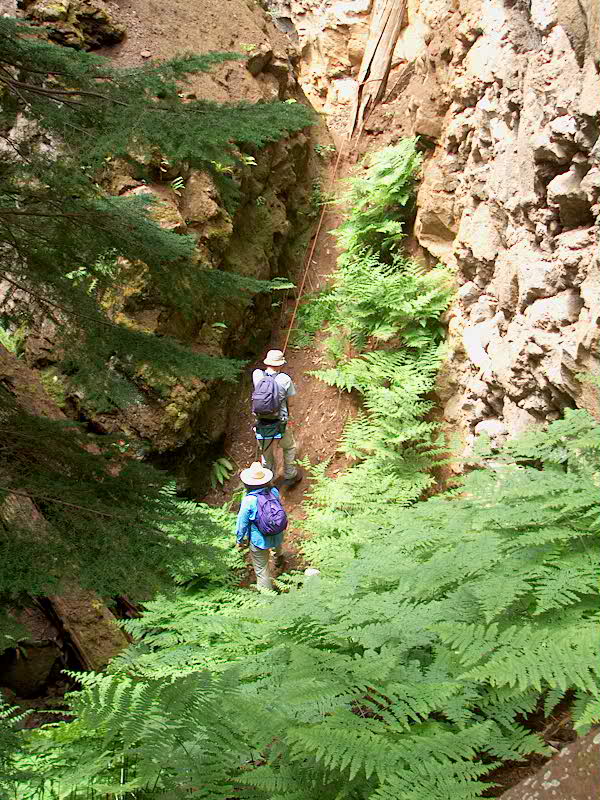 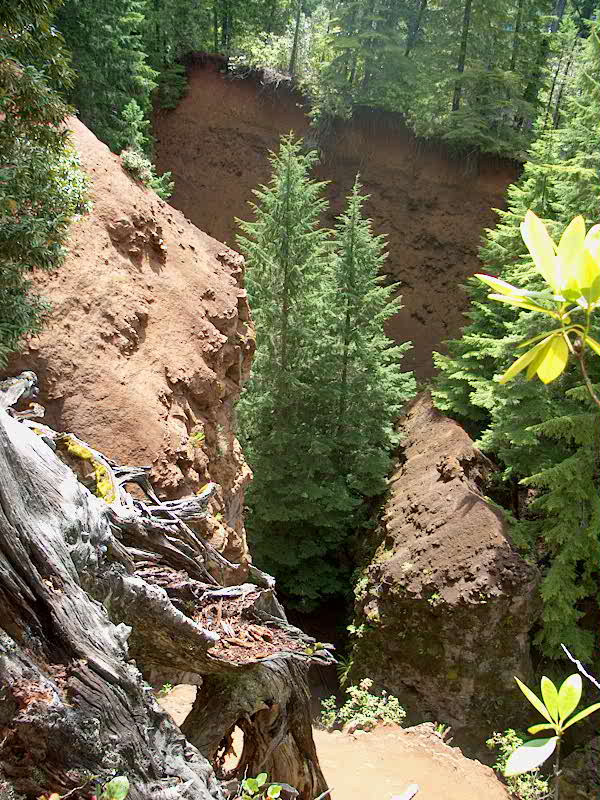