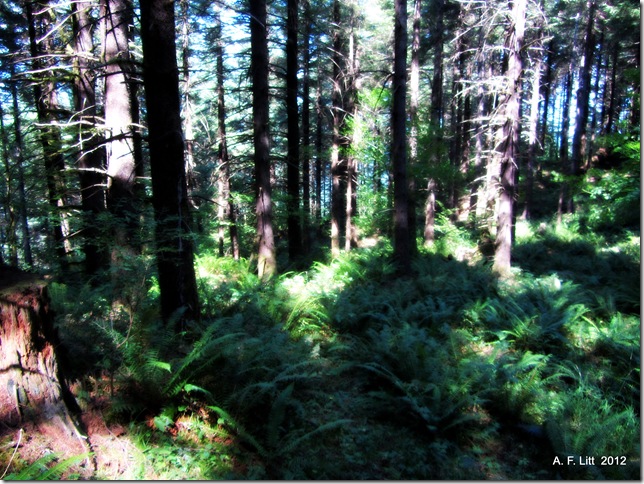 After hiking up to the “crater” at Bobs Mountain today (and looking for it’s missing apostrophe…), I thought I would look around for some more information about this mountain and the Boring Lava Fields in general.  It is surprising how little is really known about them…

Still, after poking around up there today, I am leaning towards the crater being an erosional artifact, maybe a cirque from the Pleistocene and not an actual crater.  It seems to me that a crater that size would not have survived on a volcano this old in this region. (See my earlier thoughts on this topic here… http://rubble.blogspot.com/2012/01/trail-report-bobs-mountain-washington.html)

It’s on the north side of the mountain and it reminds me of a smaller, lower, softer version of the cirque that is Larch Mountain’s “crater.”

John Eliot Allen, in his 1975 paper “Volcanoes of the Portland Area, Oregon” (http://www.oregongeology.com/pubs/og/OBv37n09.pdf), writes that Bobs Mountain may be “a relatively recent cinder cone” with a “crater outlined by an arcurate ridge, …lower on one side as the result of breaching by erosion.”  This does describe what I saw up there today, though I would suggest the entire shallow depression was caused by erosion and just happens to bear the appearance of a typical, younger cinder cone’s crater. 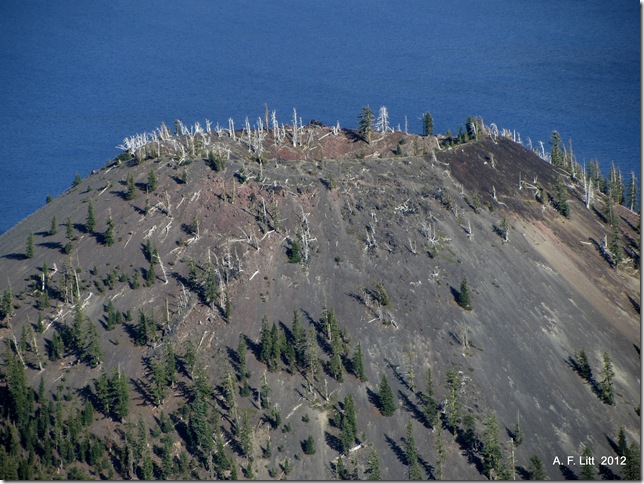 Remember, even if this is one of the youngest of the Boring cones, we are still talking about a likely age of “50–130 ka,” which still leaves it vulnerable to late Pleistocene glaciation, as is assumed to have created the Larch Mountain crater.  Recent, in this case, is not very recent.

Apparently, though, these ages are still vague, with more research needing to be done.  Perhaps Bobs is a lot younger than we realize, though this does seem unlikely.  But, as Allen writes, “more exact dating of the Boring Lava is urgently needed.”  That was in 1975.  I am not sure what has been done since.

While Bobs’ crater is on the north side, it may be a little low…  In a different article (“Ice-Age glaciers and Lakes South of the Columbia River Gorge” OREGON GEOLOGY, VOLUME 51, NUMBER I, JANUARY 1989 - http://www.oregongeology.com/sub/publications/OG/OGv51n01.pdf), Allen writes that he only assumes that a feature is evidence of glaciation in this area if “the landform is at an elevation above 3,000 ft, it is on an east or northeast slope, and it is one of a group of at least three similar nearby landforms located in similar topographic positions.”  Later on he reiterates that glaciers in this region “rarely extended down below 3,000 ft in elevation.”

Since Bobs is significantly lower than 3,000 feet (2110 feet), I suppose I still have to allow for the possibility that Bobs is like Black Butte, near Sisters in central Oregon, an ancient volcano that appears to be a recent one.  However, since the two peaks exist in such different locations, and since Bobs sits in a region that did experience significant erosion from local, alpine glaciers during the Pleistocene, and since it is unlikely that Bobs is less than 15,000 years old, I still have a hard time believing that erosion would not have been the principal cause of this feature…

Again, from Allen, discussing features such as the Larch Mountain cirques, “It is probable that most of [the glacial features on peaks across the Columbia from Bobs] described here were results of the last Vashon or Pinedale glaciation (Crandell , 1965), which culminated 15,000 years ago.”

Allen, 1975, Volcanoes of the Portland Area, Oregon: State of Oregon, Department of Geology and Mineral Industries, The ORE-BIN, v.37, no.9, September 1975

Both upstream and downstream from Vancouver, at the edge of the basin, there are exposures of Columbia River basalt. Within the basin itself, the basalt units lie more than 1,000 feet below the surface. Starting during the Miocene and continuing through the Pliocene, the basin was filled by sediments of the ancestral Columbia River. Named the Troutdale Formation, these deposits can be divided into two general parts: a lower gravel section containing pebbles and cobbles that were derived from the Columbia Basin and the Okanogan Highlands, and an upper section that contains vitric volcanic glass (hyaloclastic) sands. The hyaloclastic sands owe their origin to Cascade Range Simcoe Volcanics flowing into the Columbia River, explosively quenching, and then being redeposited downstream in the Portland Basin as sand. A volcanic breccia subunit of the Troutdale Formation, representing a lahar, has been mapped near Woodland, Washington.

Lastly, as the glacial Lake Missoula catastrophic floods burst out of the Columbia River Gorge 12,700 to 15,300 years ago, the waters ponded in the Portland Basin. Backwaters caused the deposition of well-sorted sand, clay, and gravel. The Boring Volcanic Field of the Portland-Vancouver area, Oregon and Washington: Tectonically anomalous forearc volcanism in an urban setting:

Although the character of volcanic activity is typical of many monogenetic volcanic fields, its tectonic setting is not, being located in the forearc of the Cascadia subduction system well trenchward of the volcanic-arc axis. The history and petrology of this anomalous volcanic field have been elucidated by a comprehensive program of geologic mapping, geochemistry, 40Ar/39Ar geochronology, and paleomag-netic studies. Volcanism began at 2.6 Ma with eruption of low-K tholeiite and related lavas in the southern part of the Portland Basin. At 1.6 Ma, following a hiatus of ~0.8 m.y., similar lavas erupted a few kilometers to the north, after which volcanism became widely dispersed, compositionally variable, and more or less continuous, with an average recurrence interval of 15,000 yr. The youngest centers, 50–130 ka, are found in the northern part of the field. Boring centers are generally monogenetic and mafic but a few larger edifices, ranging from basalt to low-SiO2 andesite, were also constructed.

I did know know this about Kelly Butte.  This might be next on my list to explore…

On Portland Hikers, we explore abandoned trails, but what about an abandoned park? You park at a rusting gate and walk up a paved road to the former Kelly Butte Civil Defense Center, carved into the middle of the hill bunker-style. The Center was built in 1956 to act as command center in case of nuclear attack. It later became the 9-1-1 emergency dispatch center, but in the mid-90s was completely abandoned and vandalized. Now a massive slope of bulldozed dirt covers the entrance. A great horned owl flapped away from the entrance when I visited here last. On top of the Center is a meadow that used to host park amenities like picnic tables. A trail leads around and over the top of the butte through woods of Douglas-fir, hemlock, and vine maple and thickets of hawthorn and snowberry. You can walk west to get views to Portland’s downtown and then continue down towards Powell to the large water tank at the southwest corner of the “park.” 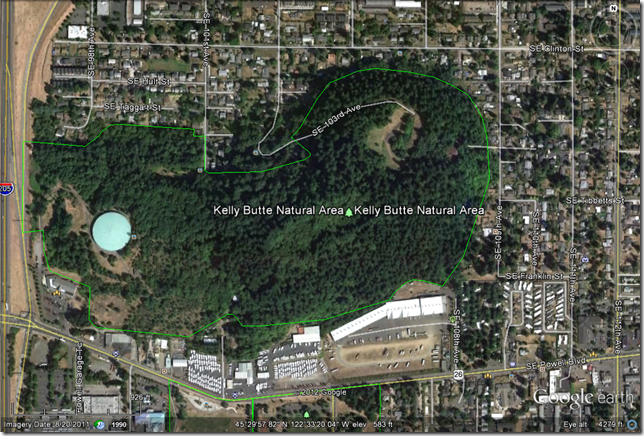 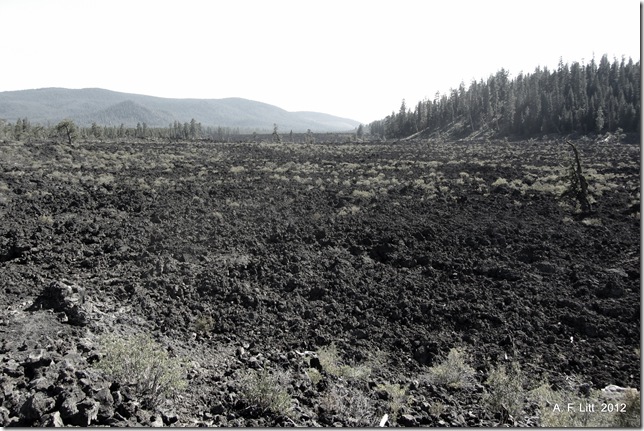 The other find of the evening’s search was the existence of Lava Tubes in Portland.  This is one of the things I was curious about.  A few weeks ago, standing on a 7000 year old lava flow in central Oregon that ran between two buttes that look like they could have been transported from my neighborhood, I started wondering if there were some buried lava flows and other fun volcanic artifacts in the area.  Well, there are a few, including at least one lava tube, the Catlin Gabel Lava Tube System. 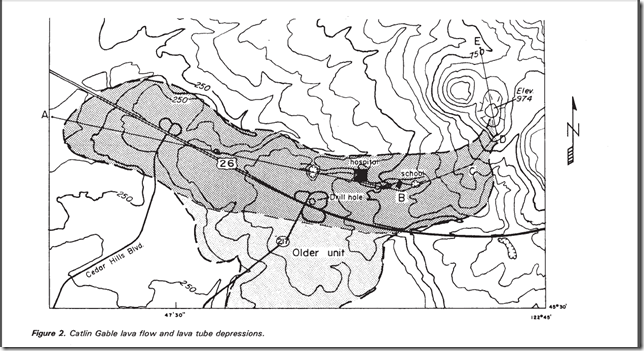 According to yet another article by Allen (“The Catlin Gabel Lava Tubes of West Portland, Oregon: Remnants of a Plio-Pleistocene Cave System” http://www.vulcanospeleology.org/sym03/ISV3x06.pdf), the system is the oldest found in Oregon and is probably (just probably) completely caved in…

First, there’s a lava flow running next to (and under) the Sunset Highway?  Yep… But it’s buried.  “Recent erosion has modified the original surface expression of the lava, and a mantle of Portland Hills Silt as much as 30 feet thick has further masked the surface.”

Apparently the lava tube was discovered during excavations during St. Vincent hospital’s construction.  That section was collapsed and filled with rubble.  But is the whole thing?  Who knows…  I couldn’t find any more recent research than Allen’s 1974 paper.

Although the cross section (Figure 3) shows segments of the tube still intact, an alternate possibility exists – the entire tube system may have collapsed.  In that event, the tubes would consist of channels filled with the debris of the collapsed roofs.  According to R. J. Deacon (Shannon and Wilson 1968), the “rubble-filled channels” beneath the hospital site were masked by undisturbed layers of ash and silt.  This indicates that the roof of the two tubes at that location may have fallen in before the ash and silt were deposited.  If this alternative is valid, it has important engineering implications: those structures such as Catlin Gabel School, that directly overlie the projected course of the tubes, would be in less danger of collapse.

While there are, so far, “no visible openings” to any surviving sections of the tube system, there are five, closed collapse depressions.  Usually, this is the way in.  However, these caves are so old, I wonder how noticeable they even are today. 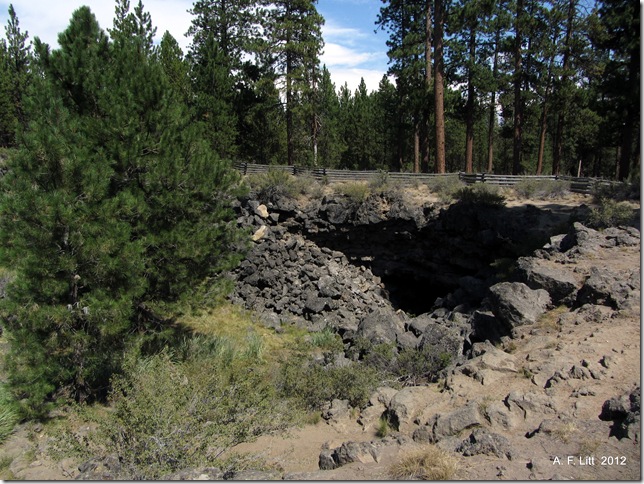 Allen describes the locations of these tubes and I was able to locate the first three, I think, in Google Earth.

Along the center of the [lava flow’s] arc, within a distance of 6,000 feet, are five closed depressions.

I am not sure how accurate the Google Earth elevation data is, but it appears that the first collapse depression is now the Catlin Gabel School’s parking lot. 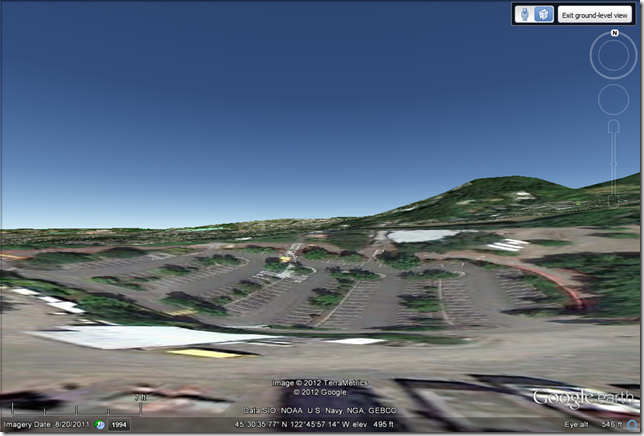 While all five depressions are visible on the 1961 USGS map… …only three depressions are visible on the most recent USGS map. 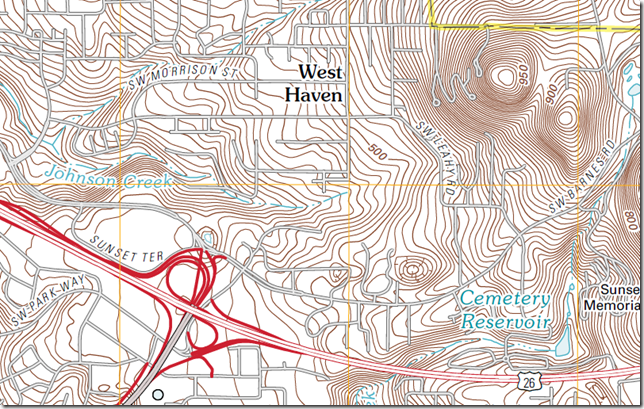 Another bit of exploring I want to take on in the next few days…  To go and see what is left of these depressions!

from tag science
from tag volcano

Do you have coordinatesome to the first depression you found on Google earth?
"Allen describes the locations of these tubes and I was able to locate the first three, I think, in Google Earth."

It's been a lot of years since I wrote this so I am not too sure what I located in Google Earth at this point... Of course, the school parking lot is one (45°30'36.35"N, 122°45'57.96"W) and the other two or three that are, perhaps, still somewhat recognizable are around St. Vincent's Hospital. The best way to locate them would be to utilize the USGS maps.