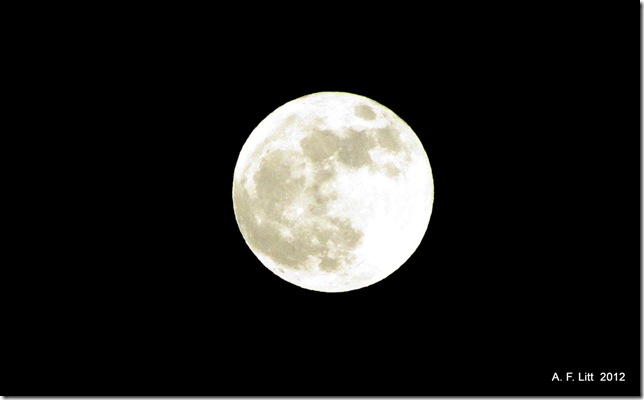 Dropping a dime on the Moon | Bad Astronomy | Discover Magazine:

So, tonight is the so-called Supermoon, when the Moon happens to be full at the same time it’s at perigee, the point in its orbit closest to the Earth. This makes it somewhat larger and brighter than normal, and that’s getting a lot of attention in the press. I pointed out a few days ago that in reality, you almost certainly won’t notice the difference between this full Moon and any other, mostly because the difference is small, and our eyes and brain are terrible at judging things like that without something to directly compare it to.

You may’ve seen some folks writing about this weekend’s so-called Supermoon. I suppose I’m not surprised, but it’s still irritating. Why? Because it’s just hype (and to get this out of the way immediately, will have no real effect on the Earth, either). Here’s the scoop.

This weekend, on the night of May 5/6, the Moon will be full. This happens every 29 days or so when the Moon is opposite the Sun in the sky, and we see its face fully illuminated.

As it happens, the Moon’s orbit is elliptical, and so sometimes the Moon is a bit closer to the Earth than other times. Every now and again the Moon is full when it’s also closest to Earth — the point in its orbit called perigee. May 5th is one of those times.

from tag Space
from tag moon
from tag astronomy
from tag photo
(more..)
Posted by A. F. Litt at 11:16 PM