Canyons of the Ancients National Monument: Is it Really Safe?


On July 21, 2017, the Department of the Interior released the following statement from Secretary Ryan Zinke:

When the President and I began the monument review process we absolutely realized that not all monuments are the same and that not all monuments would require modifications​. ​Today I’m announcing that​ ​Canyon of the Ancients National Monument review process has concluded and I am recommending no changes be made to the monument​.  Canyons of the Ancients​ ​is​ gorgeous land, but its monument status as the most high-density Native American archaeological sites in the Nation​ is clear. The history at this site spans thousands of years, and the federal protection of these objects and history ​will help us preserve this site for a thousand more years.


There is oil and gas here, which would seem to put the monument near the top of the list of 27 monuments in danger of reduction or elimination.  Extraction of energy resources is one of the main motivations of the Trump Administration's monument review.


However, the land within this monument was already heavily leased out before its creation in 2000, and its existence does not significantly affect oil and gas production, as President Clinton's proclamation establishing the monument notes:


Because most of the Federal lands have already been leased for oil and gas, which includes carbon dioxide, and development is already occurring, the monument shall remain open to oil and gas leasing and development; provided, the Secretary of the Interior shall manage the development, subject to valid existing rights, so as not to create any new impacts that interfere with the proper care and management of the objects protected by this proclamation; and provided further, the Secretary may issue new leases only for the purpose of promoting conservation of oil and gas resources in any common reservoir now being produced under existing leases, or to protect against drainage.

So the energy resources are being extracted from the monument already, Colorado politicians are not screaming about "federal land grabs" and wanting to sell this land for the state's own profit (like Utah... notice how the monument's western boundary is the Utah border?), and Secretary Zinke is recommending that this monument should be left alone.

As I've written elsewhere, I still fear that the President might just eliminate all 27 monuments regardless of the Interior Department's final recommendations.  It is something he can try to do on his own, without needing that complicated support of Congress, and a decent chunk of his base would support this.

Of course, any such actions with any of the monuments will be immediately hauled into the courts, a process that might take a long time to resolve.

Alright, enough of the fear and the politics and the politics of fear...  What's going on with the monument itself, right?  I've been promising to write about the actual monument for a long time, and I haven't done that yet!  So, let's move on to that...


As the BLM says:


Of course, I am sure those sites all stop at the Utah border... Except for the ones at Hovenweep...  Oh, but like I said, enough of that.

While there are a few sites in the monument developed for visitor access, most of the archaeological sites are not mapped for the public and there is no developed trail system to reach them.  I've actually seen it suggested, for people with desert backcountry experience, that one of the joys of this monument is to blaze out cross-country, exploring the monument on foot, and searching, respectfully, for these hidden places on one's own, though I would definately check in with rangers at Hovenweep National Monument or the staff at the Anasazi Heritage Center/Monument Headquarters before undertaking such a trip.


I didn't take the time to do that on my visit to the monument, and it is one of my regrets from that trip. Little was planned when I visited, and really, unfortunately, this was one where I was really just wanting to count coup while on my way to Hovenweep and Mesa Verde National Park.

In hindsight, I would have loved to have camped for a few nights at nearby Hovenweep and spent at least one day exploring these canyons more, but the day I passed through the bulk of the monument, I had few plans at all other than some basic, random wandering.  I had just spent about two weeks based around Moab exploring Canyonlands and Arches National Parks (and several days dealing with some van issues) and was, for the most part, fleeing the area with little thought about what to do next.

The day before, a ranger at the Needles Visitor Center in Canyonlands mentioned that it snowed the night before at Mesa Verde, and I realized that it was relatively close, so I headed out in the morning with vague plans of driving through Canyons of the Ancients, visiting Hovenweep, and then camping for a night or two at Mesa Verde.

Of course, it was a day where I had my wander on, so I actually ended up visiting the Four Corners monument and Ship Rock in New Mexico before finally landing, late, at Mesa Verde that night and spending close to a week in the Cortez area.


In many ways, this monument feels like an extension of Hovenweep.  Hovenweep was created in 1923 to protect "six groups of Ancestral Puebloan villages." (Wikipedia)  However, the area surrounding the very specific sites in Utah and Colorado protected by Hovenweep contains, as mentioned earlier, over 9,300 recorded sites with "thousands more await[ing] documentation and study." (Presidential Proclamation)  These include not only old Anasazi / Ancestral Puebloan sites, but also much older sites dating back 10,000 years or more.  (Presidential Proclamation).  These sites gained the same protections as the Hovenweep villages when Canyons of the Ancients was created in 2000.


Away from the main monument, near Dolores, Colorado, is the Anasazi Heritage Center, which also serves and the national monument's headquarters.  There are two archaeological sites here, Dominguez Pueblo, the remains of an independent, single family settlement just next to the Heritage Center, and the larger Escalante Pueblo on the hill above the center.  Out of the non-cliff dwellings, Escalante is one of the more scenic pueblos I visited on this trip, with great views of McPhee Reservoir, Sleeping Ute Mountain, and the surrounding countryside.


The Heritage Center itself predates the monument.  It first opened to the public in 1988 and was built to preserve 3 million artifacts collected from sites in the Dolores River valley that were drowned when the Mc Phee Dam was completed in 1984.

This is a great museum on the Anasazi / Ancestral Puebloans and an essential stop in the region, superior even to the fine exhibits at near by Mesa Verde.  The more recent history of the Dolores River is very interesting, as well, from Francisco Anastio Dominguez and Silvestre Valdez de Escalante's expedition in 1776, a failed attempt to find a route from Santa Fe, New Mexico to California, who the pueblos here are named after, and who themselves named the Dolores River the river of pain (or sorrow)...  The river and the surrounding area lived up to its name.  There is some dark history in these parts, and it is fascinating to take a look at it.


Canyons of the Ancients is a raw and rugged place.  While the huge cliff dwellings at Mesa Verde may be more spectacular,  the park itself feels like Disneyland compared to this quiet place.  Again, this is why I love these BLM monuments so much.  Of course, a visit to the area requires time being spent at Mesa Verde, but time should also be allowed for Canyons of the Ancients and Hovenweep.

Hopefully the monument will retain its status, but even if it does not, hopefully little will change in these quiet, barely explored canyons.  Go and find what you will there either way.

...Canyons of the Ancients is a big tourism draw for the Four Corners region, which includes Mesa Verde National Park.


“This monument is pivotal to our visitor experience,” said Kelly Kirkpatrick, the head of the Mesa Verde Country Visitor Bureau. “The monument is a huge part of the overall story of the Ancestral Puebloans, and we rely heavily on its importance to our tourism economy.” 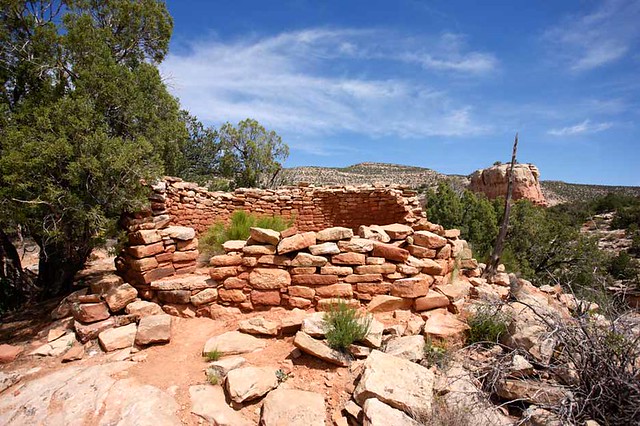 Stop numbah 3: Canyon of the Ancients. #27Monuments #MonumentsForAll I was supposed to edit the video for this and go to bed early. Instead, I ended up hiking in this unbelievable place until 2am. Some of these ruins go back 12,000 years. Video coming soon. To learn about how to save this and 26 other U.S #NationalMonuments under immediate threat, go to 27Monuments.org to find out what you can do. If you have friends who care about these places, tag them in these posts. If you have photos of any of these threatened monuments post them and use the #27Monuments hashtag. They'll automatically be featured on our website. We only have until July 10th to save these places. . For my photo nerdz 📸 🤓: Single exposure with a #sonyalpha #sonya7s. Rokinon 14mm lens. 25 seconds, f/2.8, ISO 3200 . . . #ConnectedStates #vanlife #longexposure #astro_photography #milkyway #milkywaygalaxy #milkywaychasers #newmilkyway #stars #ruins #nativeamerican #nightscaper #nightshooters #nightpics #nightshooterz
A post shared by Brent Rose (@brentdangerrose) on Jun 17, 2017 at 8:06am PDT


Canyons of the Ancients

BLM: Canyons of the Ancients National Monument Map (as of June 2017) - PDF

U. S. Department of the Interior

The River of Sorrows: The History of the Lower Dolores River Valley
https://www.nps.gov/parkhistory/online_books/rmr/river_of_sorrows/contents.htm


The Conservation Fund: Canyons of the Ancients National Monument


Over the years we’ve helped the monument protect more than 8,700 acres within its boundaries, including both the largest and the most critical private inholdings containing Jackson’s Castle (first photographed by William Henry Jackson in 1874) and the Skywatcher Site, a 1,000-year old Ancestral Puebloan solstice marker.

The Archaeology of Sand Canyon Pueblo: Intensive Excavations at a Late-Thirteenth-Century Village in Southwestern Colorado is one in a series of online site reports published by the Crow Canyon Archaeological Center. Like other publications in the series, this report consists primarily of interpretive summaries organized into separate chapters, by topic. Although summary data are reported in both tabular and graphic form to support the conclusions presented in text, the emphasis in this publication is on interpretation and synthesis, not on the reporting of basic data.

https://sites.google.com/view/nationalmonumentsindanger/home
Posted by A. F. Litt at 7:09 PM