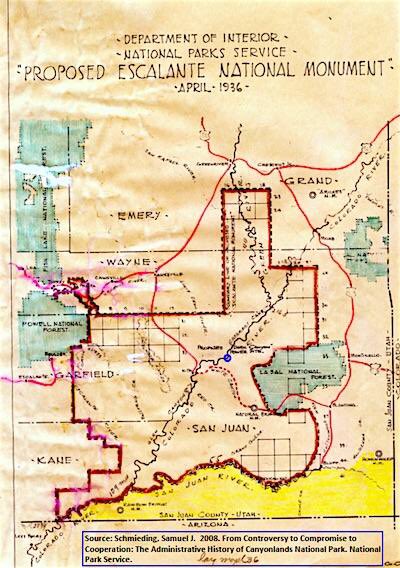 National Parks and Monuments in Distress

Many of the issues around Bears Ears were also being debated during the creation of Canyonlands. See the links below for a look at these debates.

1940: Second Escalante concept repackaged as a “recreation area” by the NPS and Interior Secretary
Harold Ickes; bills died in Congressional committees before reaching floor for vote.

1942–43: Escalante surveys continued with more emphasis placed on the Canyonlands basin as a region distinct from the rest of the Greater Canyonlands region.

1952: National Geographic Magazine article on southeast Utah published which focused on the Canyonlands basin had the first color photos of the region to appear in a national magazine.

1956: National Park Service and Bureau of Land Management agreed to first of several memorandums of understanding regarding management of the Canyonlands region.

1961: Udall led political and media junket to the Canyonlands basin in July, then announced plan for a “Canyon Lands National Park” as part of a “Golden Circle” of tourist destinations.

1961: Udall withdrew one million acres of the Canyonlands region from entry.

1965: Canyonlands staff set up residences/offices in January at Squaw Flat and Willow Flat.

1968: Bates Wilson and others at the National Park Service expressed reservations about the Canyonlands Master Plan and began to recommend scaling back park development plans.

National Parks and Monuments in Distress

https://sites.google.com/view/nationalmonumentsindanger/home
Posted by A. F. Litt at 4:10 PM